FISHEYE ON A BUDGET 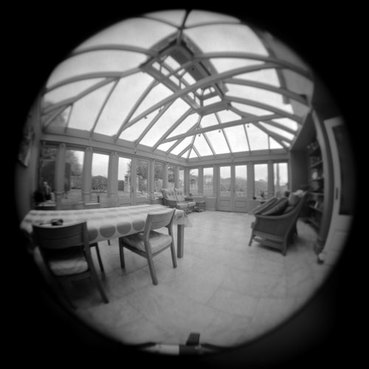 ​Great efforts of optical design have been put into ultrawide and fisheye lenses - one of the most difficult challenges for the optician. The complexity of both design and construction of high quality fisheye lenses for 35mm and larger formats causes them to be very expensive - I believe Nikon will still make you a 6mm fisheye with an angle of over 180 degrees, but it will be hand-crafted and will cost many tens of thousands of pounds! It will focus on an insect sitting on its outer surface, so make sure you keep it clean.
I have always been interested in the visual effect of very wide angles, achieved either by wide angle lenses, or by merging multiple images to form either panoramas or wide-angle views of more conventional aspect ratio. So when browsing through Sidney Ray's “Applied Photographic Optics” I was delighted to come across the very simplest design of fisheye lens that could be imagined - a plano-convex lens used with the plane side forwards, and a small stop in contact with the plane surface. This has a nominal coverage of 180 degrees, so long as you don't obscure the view forwards with any structure. Of course it doesn't have a flat field, or chromatic correction, indeed any correction of aberrations at all. It also illuminates quite unevenly, and in general probably could not be sold as a working lens to the most slightly discerning photographer.
For the experimentalist, however, it has the advantage of being available at potentially very low cost. Indeed, perhaps zero cost. Where to find a suitable lens was the next challenge, which turned out to be solved rather easily, for in the oddments box was an aspheric condenser lens from a 35mm slide projector. This is plano-convex as required, and I think the fact that the heavily curved surface is moulded as a parabola rather than a spherical form may be a benefit. I think this lens may have come from a dead Kodak Carousel projector, but probably any good quality slide projector could provide two of these - usually they are not identical, so you'd have a choice.
And slide projectors are easy to find at low prices today.
The stop consists of a piece of black paper with a suitable-sized hole, glued to the plane surface. Try several different-sized holes to get the right balance between image brightness and sharpness; working out f/ numbers may not be straightforward.
Now you need a camera; a studio monorail camera should do, with a bit of tinkering - or perhaps a folding bellows camera that has ended its first life.
The two things to watch out for are that anything at all that is forward of the flat surface of the lens will be in the picture; and that the distance between film and the rear surface of the lens will only be a few centimetres when focused at infinity. Select your camera so that it's not too hard to achieve these things. It may be that a cardboard box may be easier to work with than any "official" camera.
The image circle could be quite large, depending on the focal length of the lens, so it makes sense to work with paper negatives using a soft grade of ordinary bromide enlarging paper - just tape the paper in the back of your cardboard box, if using that method. Now you are all set to exercise your creative energies! Your pictures will need lightening at the periphery, and will not be ever so sharp, so the philosophy is more like Lomography than Photography.