I put together these notes as I worked my camera, which was jammed. I only opened up what needed to be worked on to get it going again, so this is not a complete repair manual - but I took photographs as I went, which may be helpful to others. As usual, you dismantle your camera at your risk, and if you get into trouble I can't help!

​I got a good start from the notes by Rick Oleson - a website always worth visiting before beginning work on any camera.
Original symptom – Except very occasionally, it all hung up and was impossible to cock or fire. Once or twice, though, it did work, so we have a problem of incomplete movements, etc, causing the rather complex sequence of actions to be interrupted. By the end of the project it was clear that there was no one big cause, but several slightly sticky / interfering / misaligned levers and springs. I also took the shutter apart and gave it a normal clean and check, though it was not in a bad way.

The camera has a reputation of being unreliable in this sense, and has been accused of being badly made of inferior materials. I don’t think that is right, though I’m sure it’s true that the mechanism has often given trouble. The shutter itself is a Seikosha, just like those used in many highly regarded cameras. Most problems will be due to the extra levers and interlocks added to create the sequence, which is:
​
1.    Wind knob turned about ¼-turn. This pushes down the mirror against a spring, and the mirror latches (latch on the opposite side of the body). It also winds the film.
2.    The film passes over a roller which turns the counter forward; this mechanism is separate from the winder.
3.    Cock the shutter with a separate lever. This opens the iris and shutter fully, and winds the springs inside the shutter.
4.    Fire with the button, which closes the iris to preset, closes the shutter and releases the mirror to spring up. Then the shutter itself is triggered, and does whatever it has been set to do. It also releases a stop in the film wind chain to allow the next movement of the film.
Seikosha-SLV Shutter internal notes
For an overall summary of dismantling see http://pheugo.com/cameras/index.php?print=seikosha

Some detailed pictures below of the inside of the shutter which may be helpful. 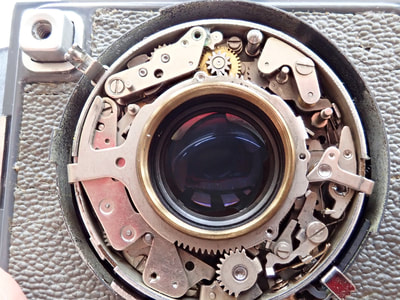 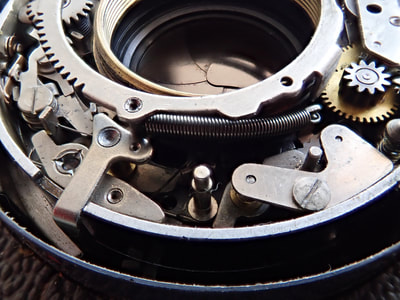 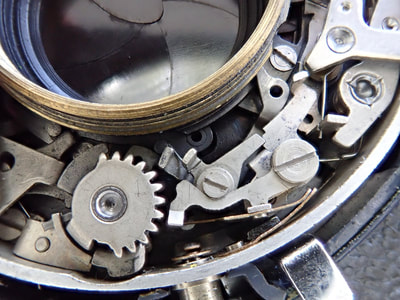 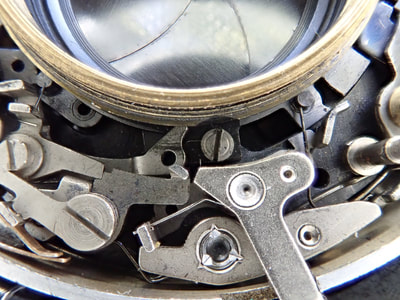 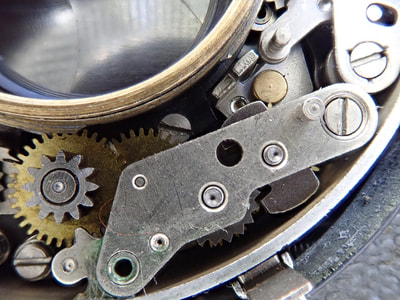 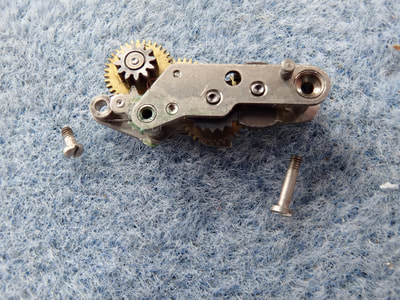 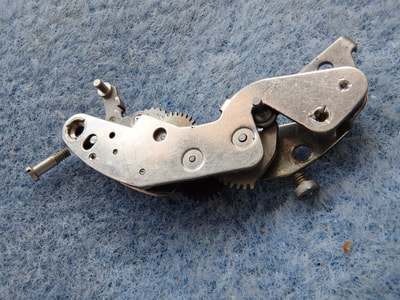 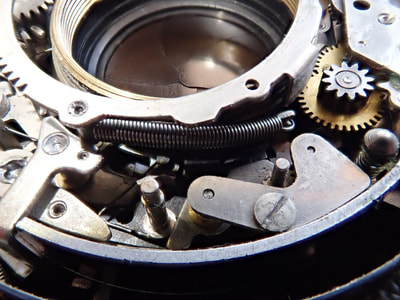 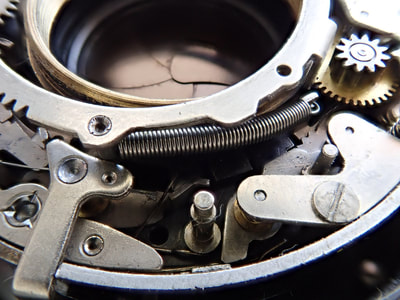 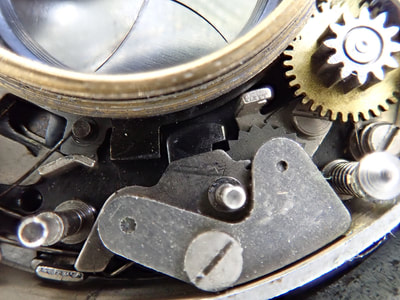 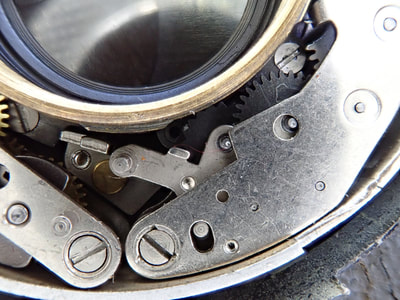 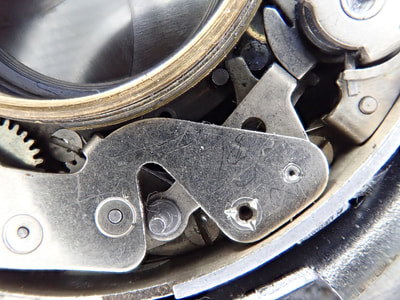 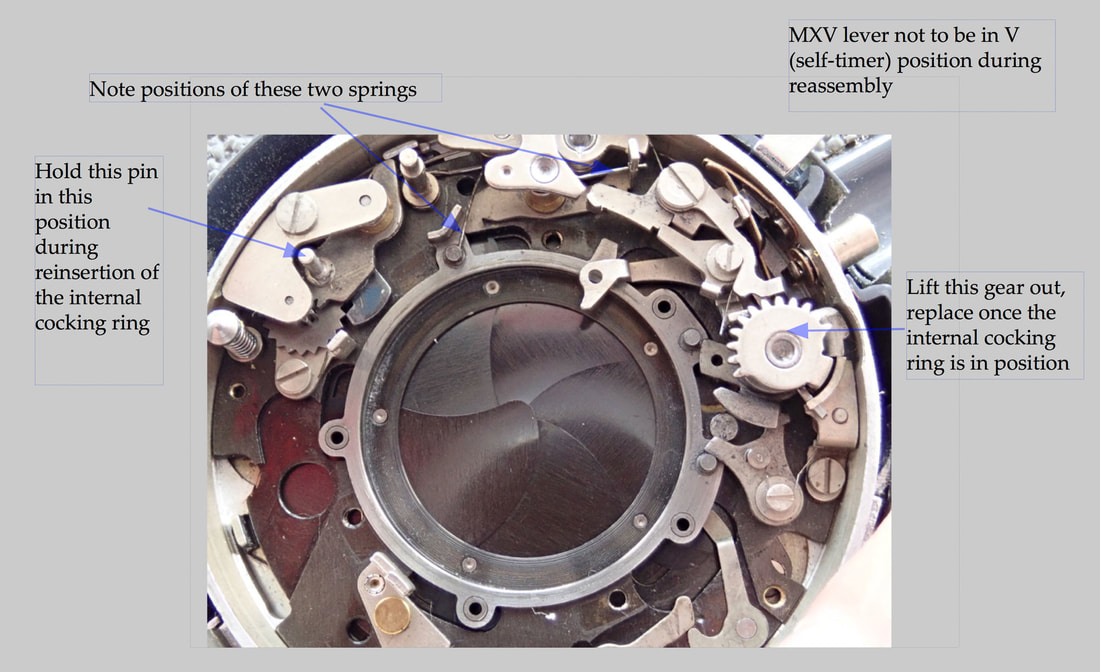 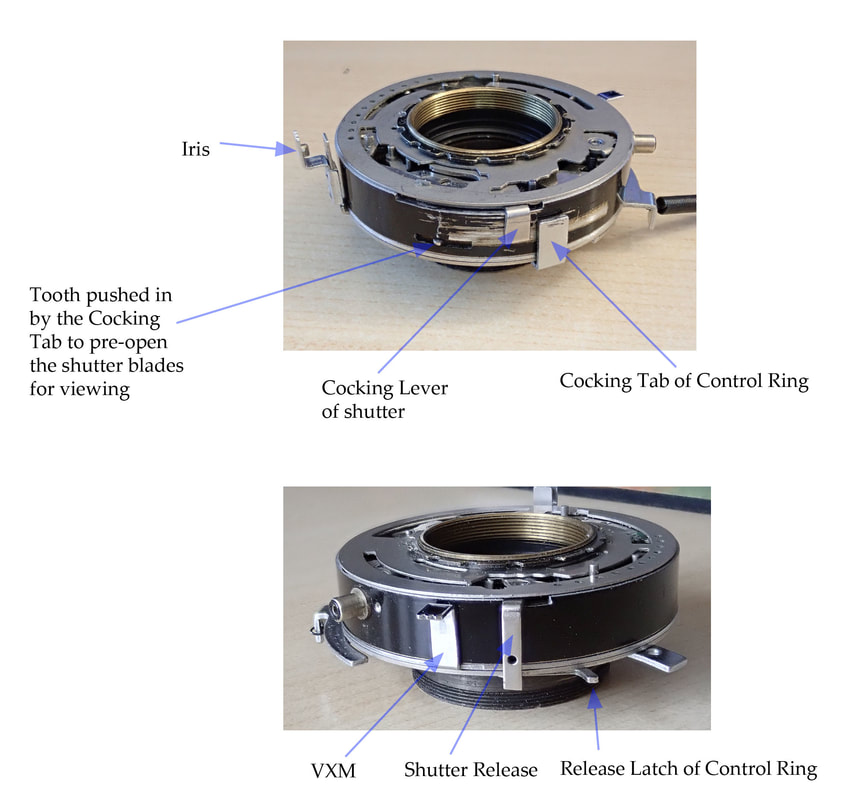 Komaflex-S Shutter setting and release sequence
The first step is to operate the wind knob. It winds the film, and brings down the mirror and mirror cover. The mirror latches down at the end of its travel, with the mirror cover behind it to prevent stray light from fogging the film. A second stroke of the lever will not wind more film. The passage of film over the lower roller operates both the frame counter and the interlock.

Pressing the shutter release button on the camera does two things - the sequence described below, and when pressed fully in, a movement of the interlock lever which will allow film winding once the exposure is done. If the camera won't wind film after exposure, try pressing the shutter button right in to make sure the interlock release has been done.
​
Exposure sequence
Between the shutter body and the lensboard are three rings which between them, control the behaviour of the shutter. Counting backwards from the shutter itself, they are:
A. The Control Ring (as I have called it).
This is the clever one, which operates the controls of the actual shutter. It can be operated (by ring B) once the film is wound and the mirror is down. The sequence is:
- rotate against spring tension to cock the shutter. To do this, it is pushed by ring B. When the shutter is cocked, it is latched twice - by the internal mechanism in the shutter, and by an external latch that holds the Control Ring in the cocked position. A tab is blocked by the interlock lever if the film has not been wound, in which case this operation cannot be performed.
- this rotation also rotates the floating plate of the iris mechanism so the aperture is fully open, and in the last part of its movement a tab presses down on the lever that holds the shutter blades open; light can now pass through the lens at full aperture to the mirror and screen.
- when the photographer presses the shutter button, ring C rotates and trips the latch on ring A, which begins to rotate under spring force. The first effect is that the tab no longer covers the end of the lever that holds open the shutter blades, which now close. Another tab then operates the trigger to release the mirror.
- during this rotation the floating plate of the iris is returned to the other end of its range, causing the chosen aperture setting to be implemented.
- finally the Control Ring reaches the end of its travel, where it hits the shutter release. The shutter now does whatever speed it was set to.
B. The external Cocking Ring.
This one has a big thumb-knob on it. All it does is wind up Ring A, and return under spring tension to its rest position.
C. The shutter release ring.
The camera's shutter button is at the bottom of the front panel, and the latch for ring A is at the top. So this ring is only needed to transmit the release command to where it is needed.


Notes on operating the camera without film
It is well known, and emphasised in the instruction book, that cocking the shutter without film in the camera can cause damage (if forced). The reason is that the interlock to prevent double exposurre blocks the cocking movement. To free the cocking lever, pull back the frame counter reset whilst cocking.
It has been reported that operating the camera without film can cause damage by excess spring strength causing over-speed movements. This is not so.
When working on the camera with the covers off, the film wind knob return spring will be disconnected, so remember to return it manually to the top each time. You can also permit cocking without film if you move the film roller on manually when you operate the film/mirror winder.
Komaflex-S Winding Gear and Interlocks 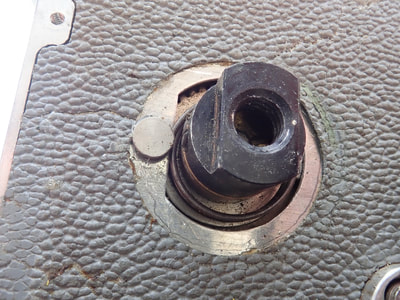 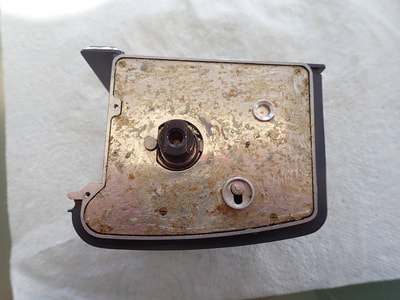 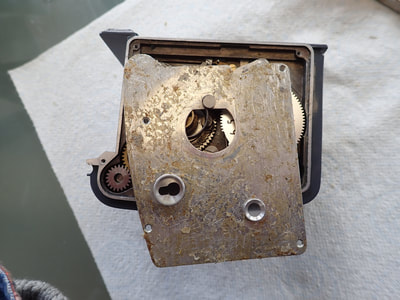 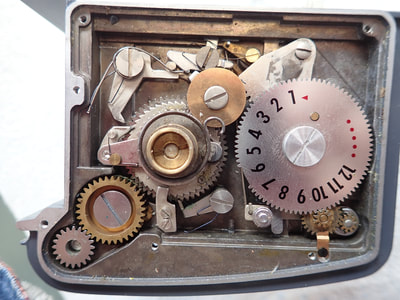 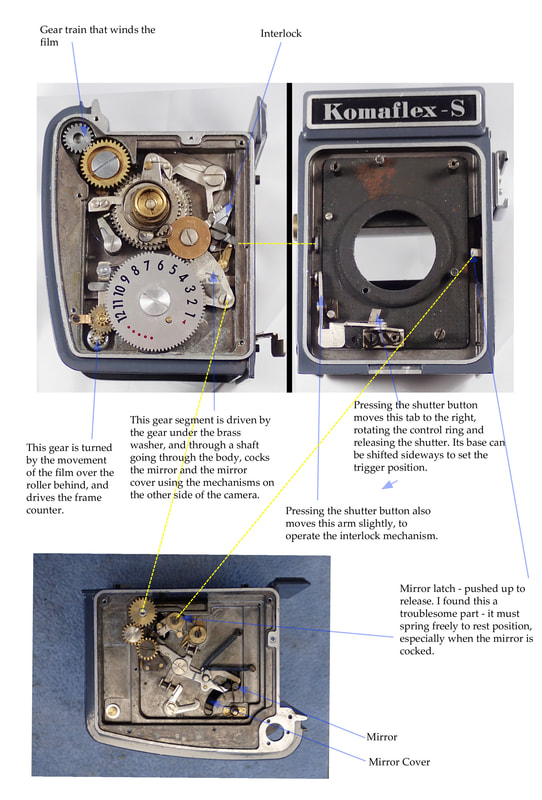