We took the opportunity of a visit by the Getty Conservation Institute to the NMPFT to carry out some non-destructive chemical analysis of a Mizuno lacquer print. With the help of Dusan Stulik of the GCI we carried out x-ray fluorescence analysis. Unsurprisingly, we found gold. This undoubtedly constitutes the image - with a trace level of silver, as one might expect. More curious, is the content of the lacquer substrate, which contains many elements: K, Rb, Ca, Ba, Cr, Mn, Fe, Cu, Sr, Pb, Ti, Zr. Presumably these represent the pigment filler which is used to give the lacquer its colour.
​To simplify the process description, the Mizuno method consists of making a contact print on a temporary glass plate, of which the upper surface is made of gold powder adhering to a sticky organic layer. This contact print is transferred to a sheet of smooth carrier paper (at which point it is "upside down" with the gold in contact with the carrier). From the carrier paper the image can then be transferred to the final surface, on which it appears gold-upwards. If the final surface is a piece of prepared lacquer, then we are firmly in the realm of the patent description, and all that is required is an overcoat of a suitable clear varnish to protect the image surface.
If, on the other hand, the final surface is glass there are two problems. In the examples we have, the image is on the rear surface of the glass and is viewed through the glass. This means that firstly the image will read backwards, so the negative would have to be the wrong way up during the original contact printing. Second, and more serious, we are no longer looking at the gold side of the image. If there is significant opacity in the materials of the original contact print, then the final appearance of the product will be diminished.
Possible solutions to this problem include: The second of these, if it can be done, would probably require much less trouble and therefore less cost in manufacture. It would be interesting to discover how Mizuno solved this problem.

Labelling
Some Mizuno lacquer prints have a pair of backstamps to identify their maker. One is in English and one in Japanese, and the texts read as follows:
English: Pure Gold Lacquer Photographs / Inventor / H. Mizuno / Fudoushita, Ota, Yokohama
Japanese: 1892 26th December XNo.1408 for 15 years PATENT Yokohama Mizuno
Sometimes also a label is to be found. One such label in English reads:
THE PURE GOLD & SILVER LACQUER PHOTOGRAPHS This one, I invented, after long weary years, is entirely a fancy new article, quite different from ordinary photographs and guarantee, never fades in its Colour. I, therefore, beg to state that my constant endeavour will be, by the excellence of the wares, the moderation of charges, and unremitting attention to the wishes of Customers, to ensure and retain that patronage and support which I now respectfully solicite. H MIZUNO Fudoushita, Ota, YOKOHAMA
[transcribed as written, without correcting the various errors.]
An example has been found with a label from S. Ogawa, a Yokohama photographer with close business and family connections to Mizuno. We believe that he was selling Mizuno’s product, rather than making for himself. Some items are also labelled by dealers/distributors, including Kondo & Co., and “Mizuno & Marcks”.

​Image Identification
There is a useful website prepared by Nagasaki University for the identification of Japanese topographical images. It is indexed by photographer, keyword, location etc and contains many illustrations of 19th-century Japanese photographs. It is frequently possible to tie down the location and sometimes the photographer of an unknown view. Popular sites appear many times and small variations of detail in the scene can sometimes allow one to tie a print down to a specific negative. The prints illustrated are almost all conventional paper prints, and none are gold lacquer prints. However, it is clear that commercial photographers were using the same negatives to produce multiple forms of output.
Mizunotypes seem to be very uncommon in public collections. Enquiries in the UK have drawn a blank in the National Media Museum, the Royal Photograph Collection, the Scottish Photography Collection and the V&A. The British Museum holds one album with a Japanese cover, dating from ca. 1902, "made of lacquer-coated wooden boards with a photograph inset on the front cover. The highlight areas consist of particles of gold". The item is not marked, but looks like Mizuno’s work, type C. The British Library also has one album with a gold Mizunotype on the cover, and the Royal Ontario Museum has an album with the same image for the cover, but in silver Mizunotype.
As there was organised export from Yokohama to the US, one might expect to find more examples there. So far we have located one in the Booth Historical Photograph Archives of the San Diego Historical Society; it is a portrait of General Mendal Churchill who died in 1902. As it was possible to send your negative to Mizuno for conversion into a lacquer print, it was not necessary for Churchill to have visited Yokohama himself – though of course he may have.
A search of the database at George Eastman House found no reference to Mizuno as a photographer in any of the 656 museum and historical society collections which they index, including GEH itself. Most of these collections are in the USA.
In Japan there is significant interest in this part of Japanese cultural history. Of course the photographs were intended entirely for export, so it is of little surprise that there do not appear to be large numbers in Japanese collections.
We would be very interested to hear of more prints in your collections!
A photograph sufficient to identify the subject, a brief description, dimensions, and  details of any stamps or labels would be a great help in filling in more details.

I was recently fortunate to buy in an auction an album of Japanese photographs from around 1890-1905 with a Mizuno silver print as its cover - with the cover frame and back looking just like a typical painted wooden frame for wall-hanging.
​This album has a silver Mizunotype cover of Shiraito Falls, perhaps from a negative by Farsari. Inside are 18 hand-coloured albumen prints by various artists; the rest of the album is blank. The cover structure is of wooden boards painted as typical Mizuno frames. The cover Mizunotype is somewhat faded-looking, slightly tarnished, and has some scratching. The lacquered wood frame and back is reasonably good, with some abrasions and small chips. The spine binding is gold-tooled leather, worn and ragged but still holding together. The internal pages have tatty guard tissues and some spotting, and gilded edges, but the condition and quality of the photographic prints is excellent.

References are to the Metadata Database of Japanese old Photographs at Nagasaki University Library, at http://hikoma.lb.nagasaki-u.ac.jp/en/keyword.html, from which the descriptions and attributions have been copied.

None of these images is illustrated or listed in Worswick (Japan Photographs 1854-1905), Bennett (Early Japanese Images), or A Timely Encounter.

Prints in the album: 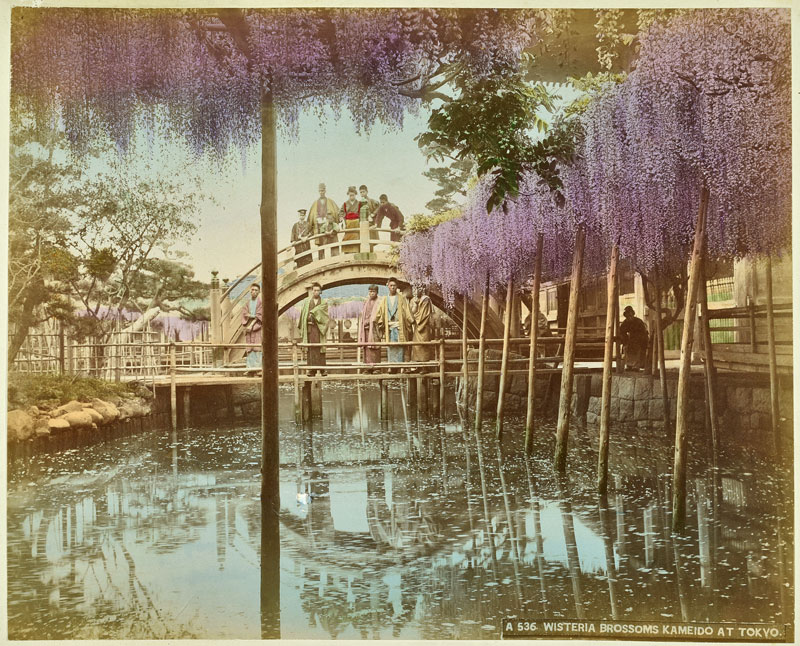 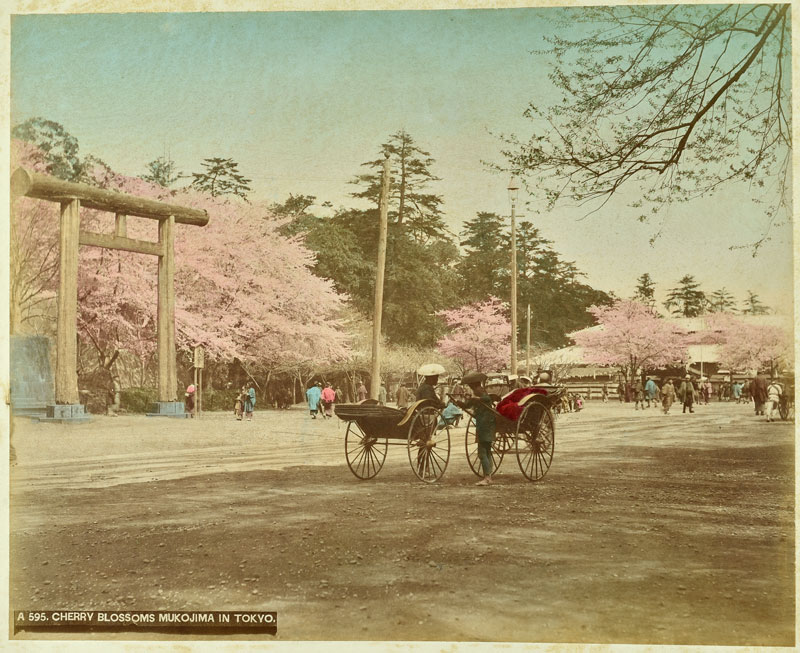 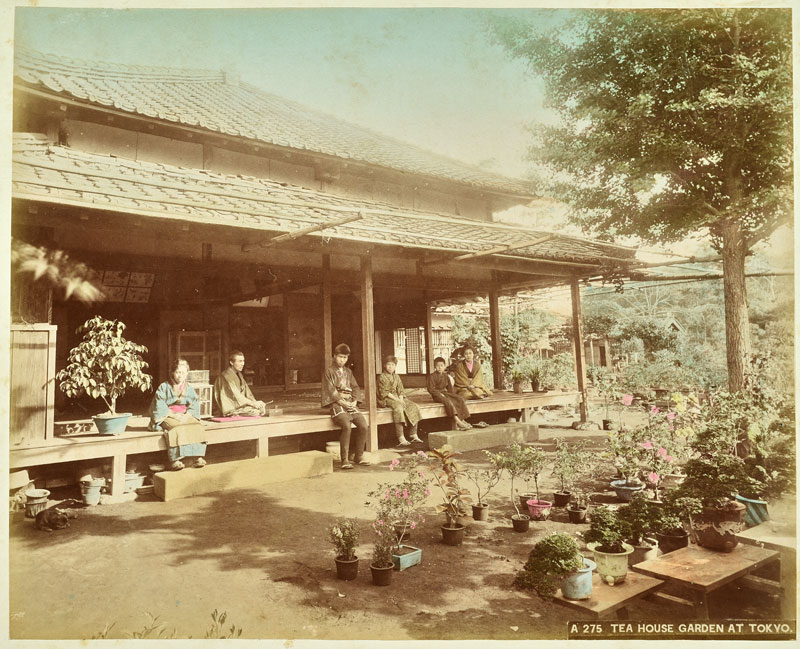 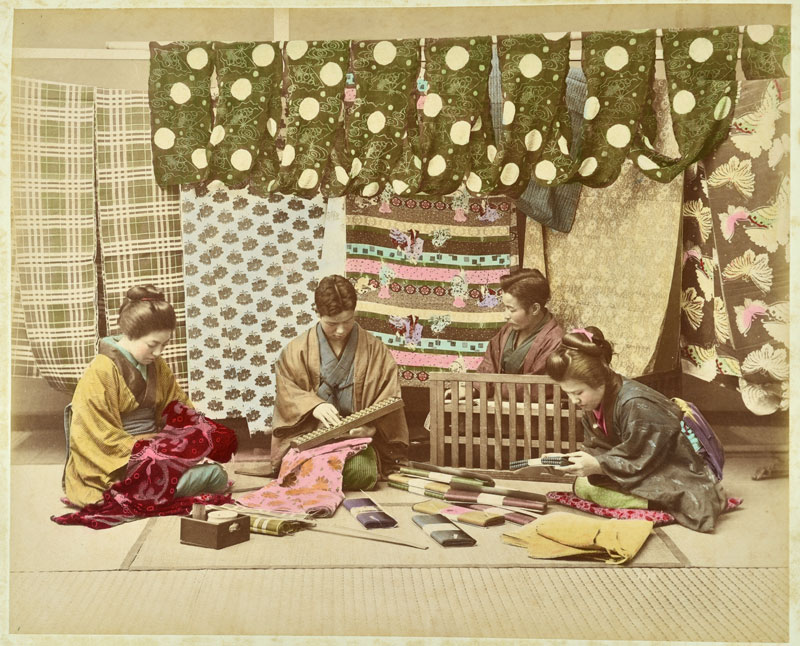 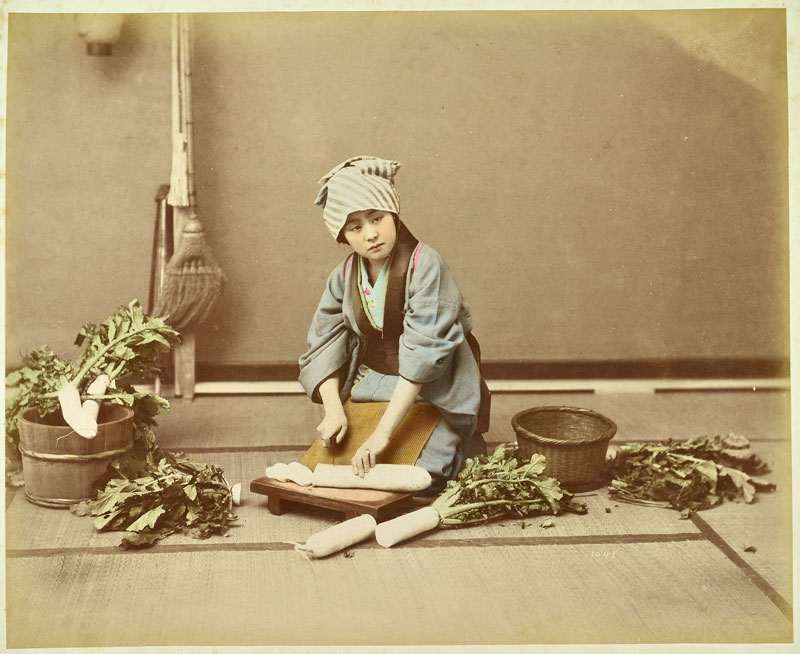 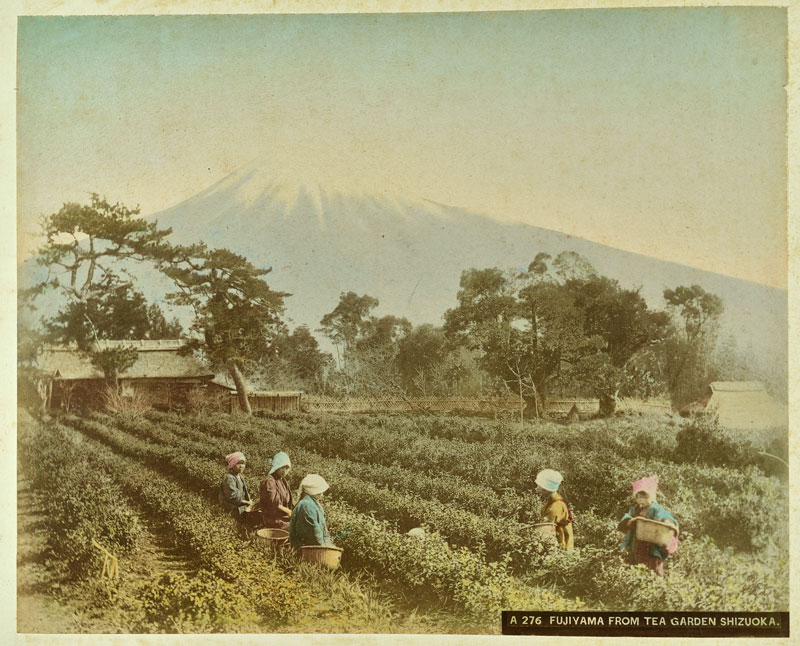 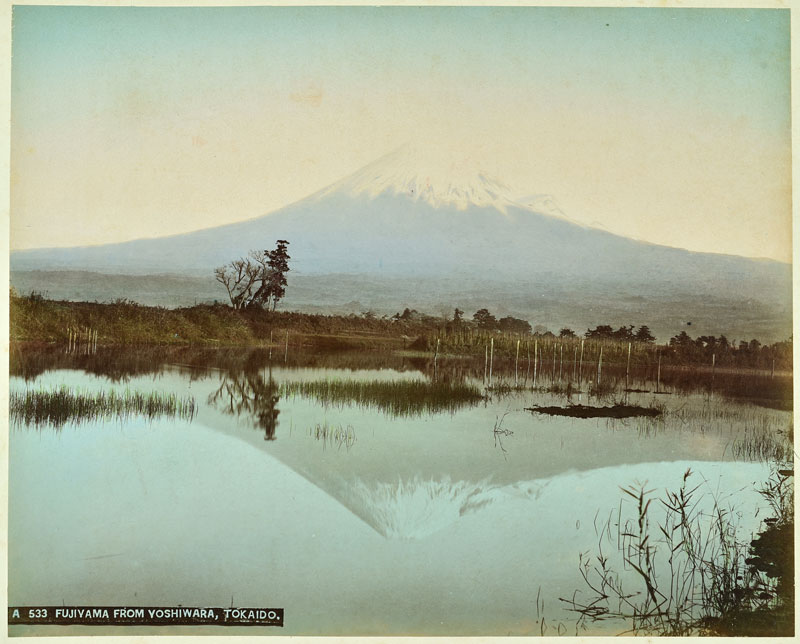 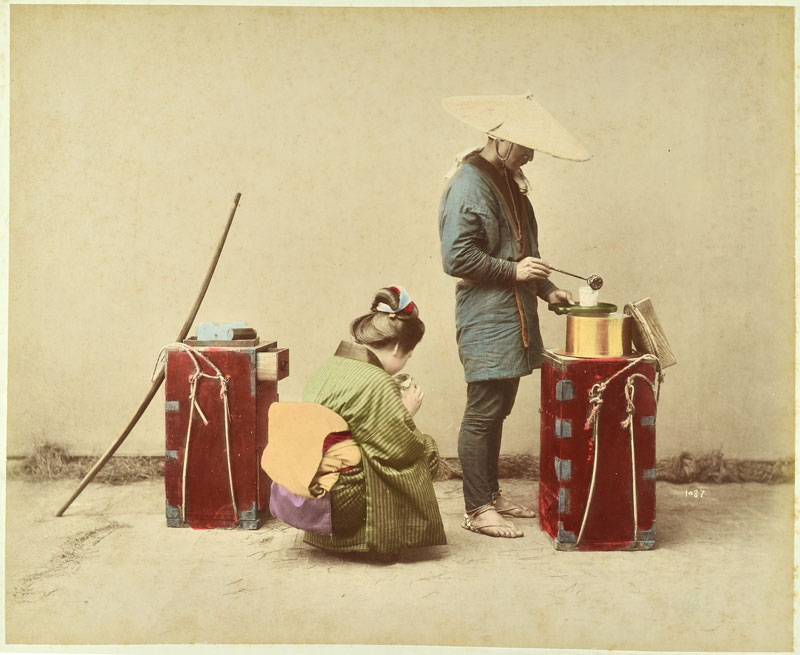 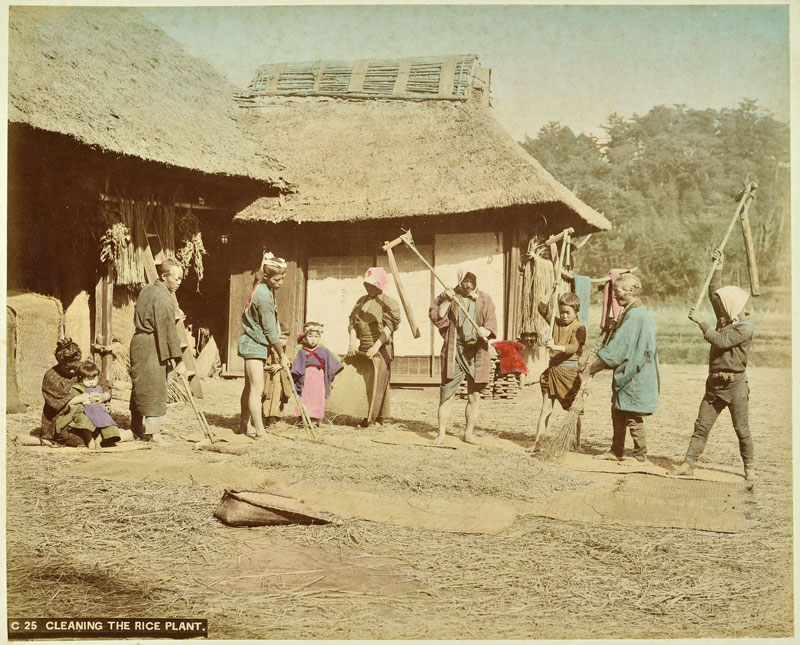 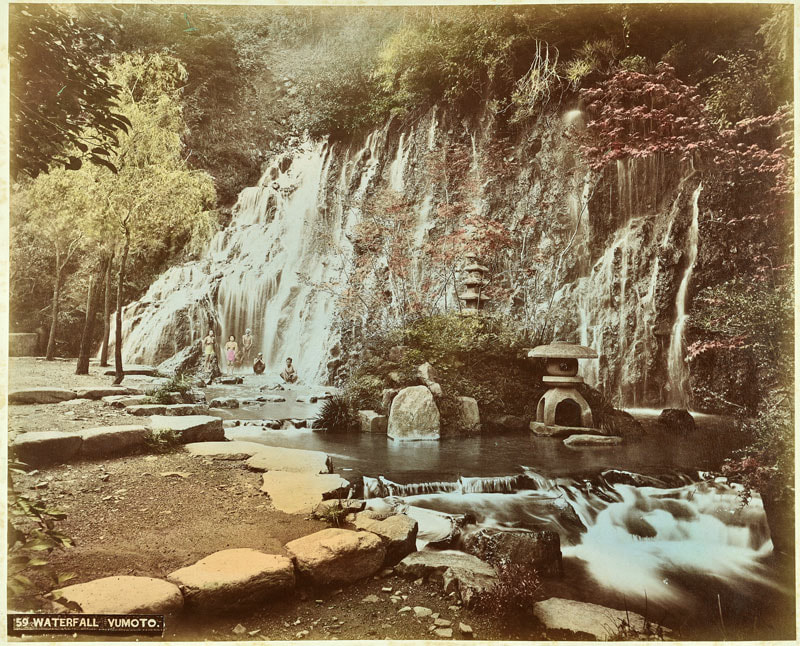 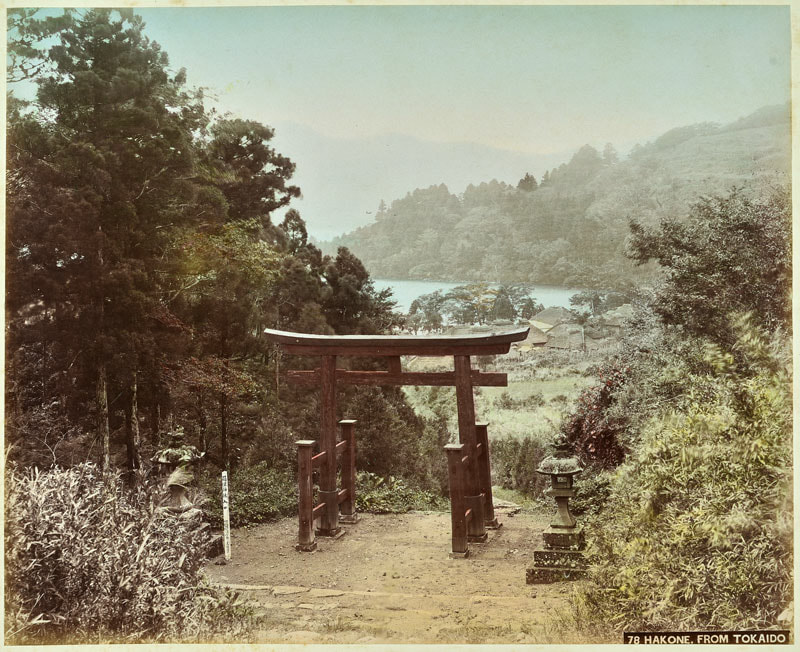 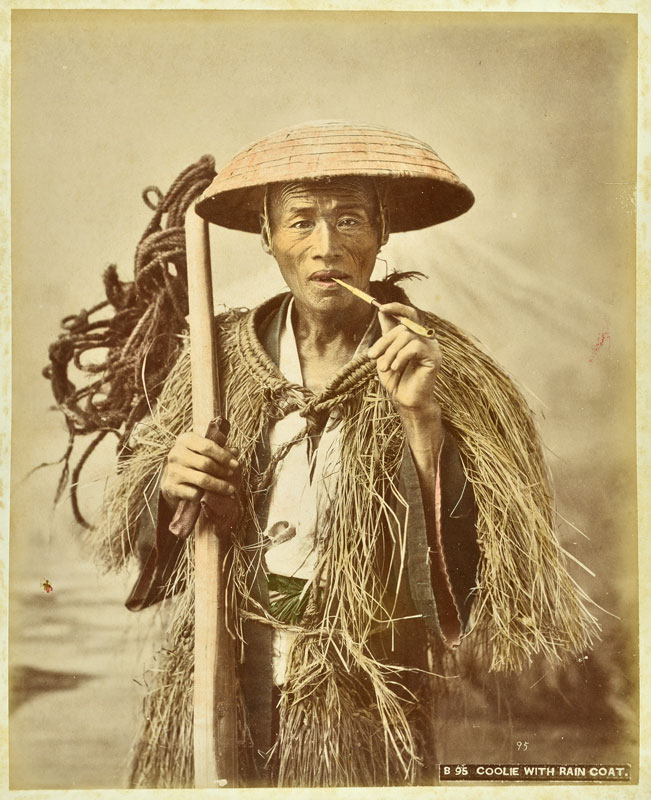 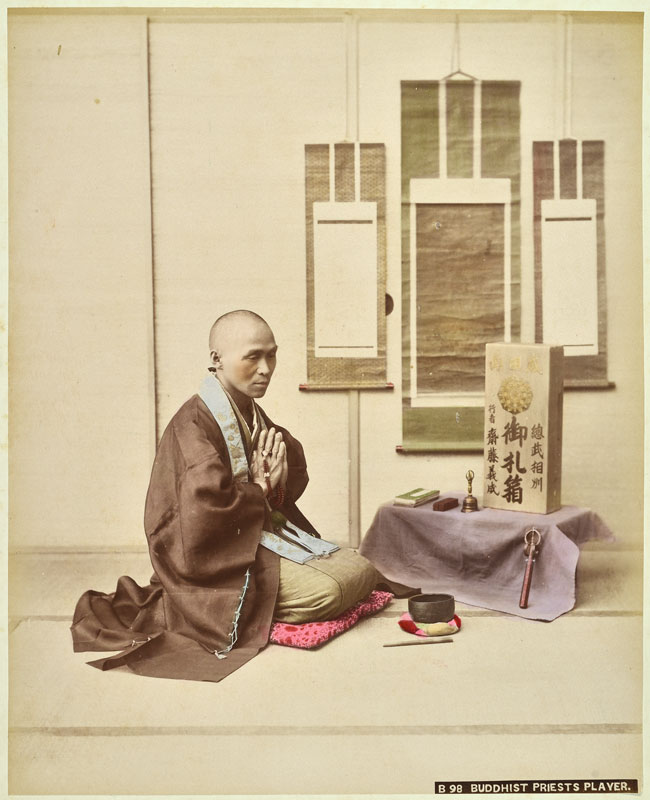 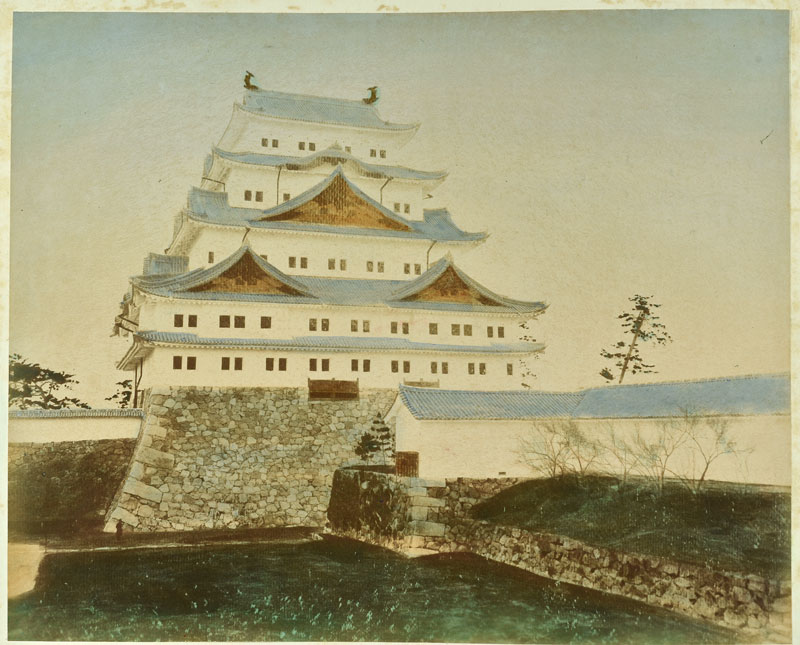 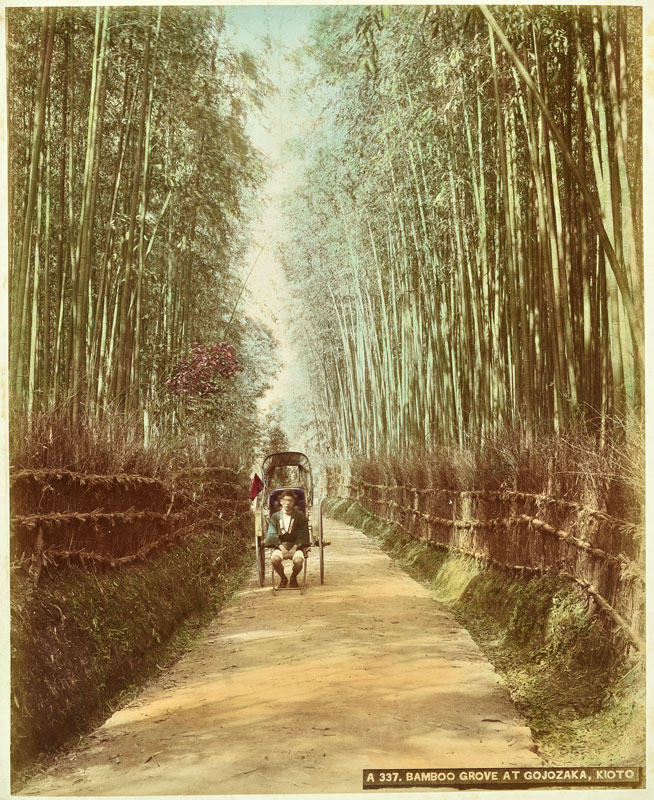 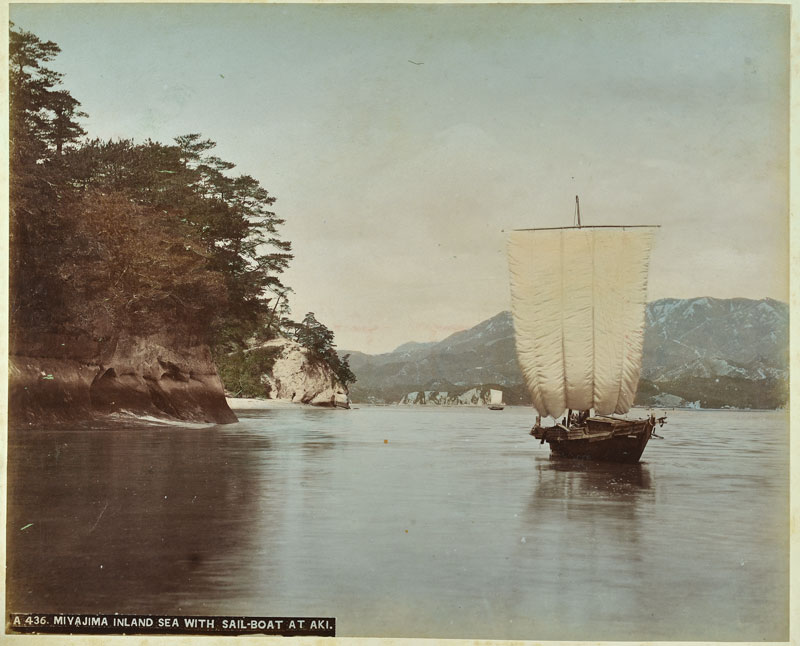 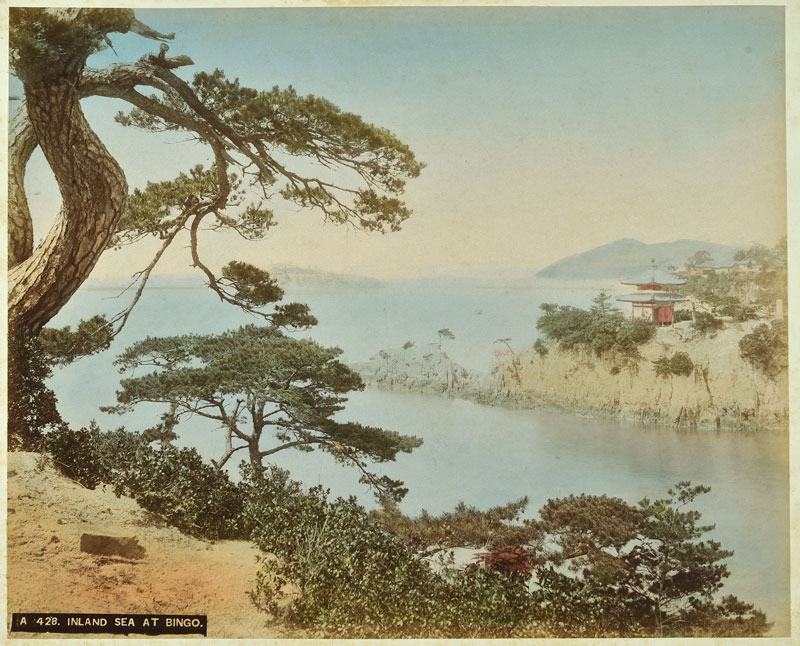 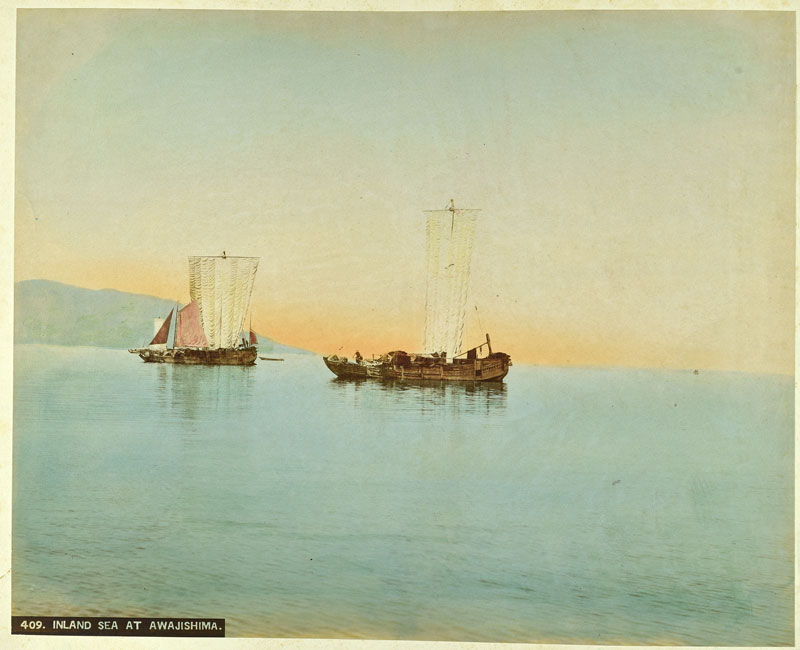